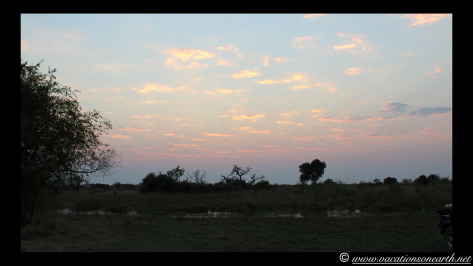 We welcomed the new day with a warm cuppa in hand, excited about our adventures ahead of us while being in awe over the beautiful sunrise and absorbing the peacefulness around us. 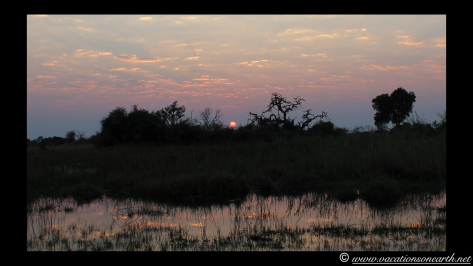 We all packed up camp, and a “chicken parade” was done to make sure we weren’t leaving any garbage behind.

Ian and I were planning to have a good look around Mamili with the option of staying another night or heading into Katima Mulilo. We had no plans but to enjoy the day.  Our friends had a long journey ahead of them as they were heading out of Mamili, through Katima Mulilo and across the border into Zambia then travelling north where they were planning to camp the night alongside a waterfall. 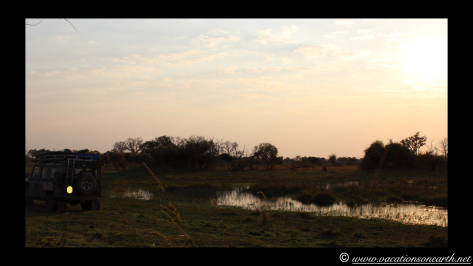 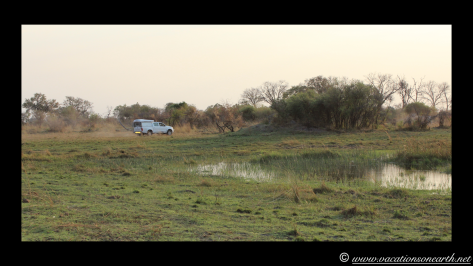 The Linyanti swamp within Mamili (Nkasa Lupala) National Park in Namibia feels like a little Okavango Delta of Botswana with its lush green landscape and multiple deepwater channels, floating reed islands and thick muddy sand.  Mamili is home to many hippos and crocodiles (with some around 5 metres in length) who disappear within the vast wet wonderland.

We were on our way, in our GEM by 7 am, Nam time and spent 5 hours exploring the area, trying to see if we could make it down to the main river. We came across some fellow travellers, camping alongside one of the tracks so we stopped and had a lovely chat with them.  He was a doctor; she was a teacher and they were on a month vacation before getting married. Fellow travellers are always friendly, especially when you’re sharing the same incredible outdoor experiences ‘together’.

It seemed that every track we took ended up being a dead end,  with us feeling as if we were being engulfed by the vast area of water that was too deep to cross.  We were determined to get as far south as possible from where we were. 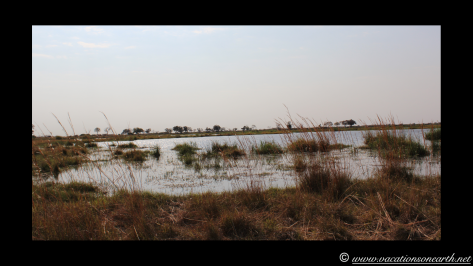 We came across what looked like a well-used crossing so we contemplated going across it.  Ian was taking control of the situation, being so brave in my eyes by doing ‘what any four wheel drive, water crossing enthusiast should do’, as he walked over halfway into the water channel to determine just how deep it was, to see if it was crossable for us.  The water reached his thigh (between his knee and hip) at its deepest where he turned around and walked back, thankfully without coming across any crocodiles.  Feeling brave we decided to give it a go and do the water crossing below, with Ian in agreement that I’ll be taking the drivers seat should we need to dig ourselves out of any thick, groggy mud.

The thick, dark brown mud caked and clogged our tyres which resulted in lessening our type grip and traction within the first section.  Once in the water, this sorted out our mud obstacle on our tyres and our GEM (Hilux) started glided through the water crossing with ease.  A metre from reaching the other side, we dropped, into a deeper section, where the water lapped over our bonnet, running up to the bottom of our windscreen!  My heart skipped a beat and adrenalin kicked in.  Our GEM just cruised through, like a boat, to the other side with ease with no spluttering sounds coming out from under her hood.

The realisation came to me as soon as we’d been through the water crossing ordeal, that we’d in all probability, be having to return via the route we had just taken due to the expanse of waterways everywhere! 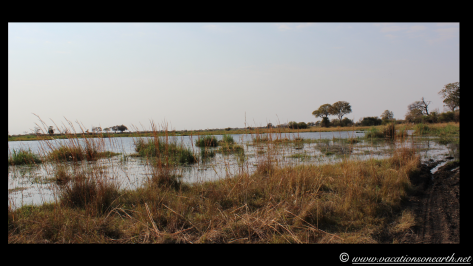 We came across some animal skeletons along our route. 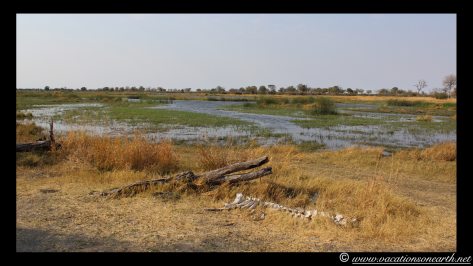 We found the bones below.  The horns either from a greater kudu or a sitatunga antelope.  They were lying in such an undignified manner, to us, in a heap of ash remains from a past fire so Ian placed the horns to rest proudly in the nearest tree. 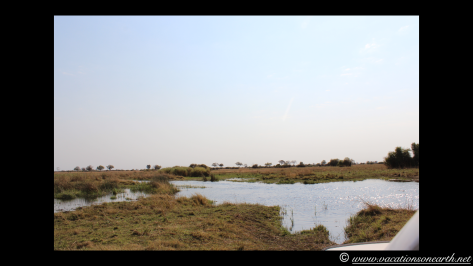 We stopped, unpacked our table, gas bottle and cooker top to make ourselves a brunch while we contemplated our day ahead.  As far as our eyes could see, in front of us and to either side,  lay a vast lake, blocking off our route to the south. On our Garmin adventure link at the bottom of this trip report, you will see on the map that opens up that we made it quite close to the main river before we called it a day.

The animal activity along our route had been minimal. We still had so many places to see on our vacation so we decided to be on our way.  We took a slow cruise out of the park after our brunch, with the excitement of returning via the water crossing where the water went half way up our windscreen as we entered it at the deep end.  It went well and GEM handled it again in style.

Impalas are enjoying their pastures in the picture below. 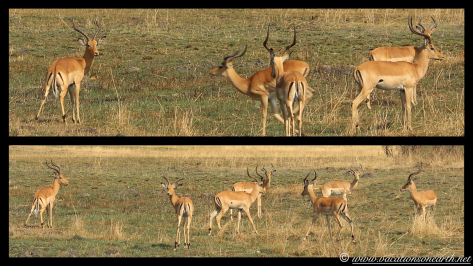 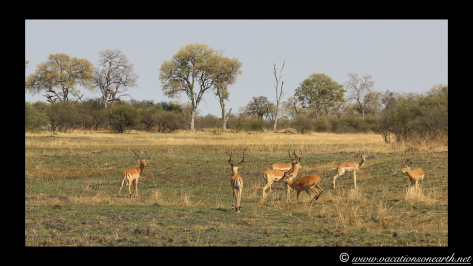 We enjoyed our wild, African bush adventure in Mamili where we camped within the heart of the National Park, entirely self-sufficient in all our needs and making sure it is left, if not better, then the same as we found it.

We were now ‘back in civilisation’, heading north-easterly, up to the C49 ring road with the National Park behind us.

At around 1 pm we were on the C49 road, driving on gravel at first then progressing to longer sections of the recently tarred road closer to the eastern side of the C49 ring road.

A few more roadworks along the way.  The gravel side roads are in superb condition and allow an uninterrupted flow of the ‘traffic’. 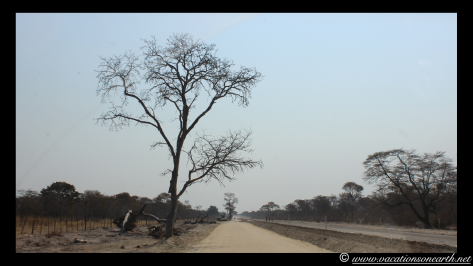 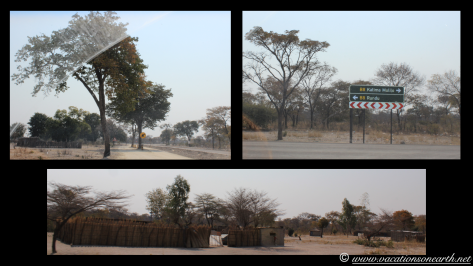 Arriving in Katima Mulilo at a bit before 3 pm on a Saturday afternoon. 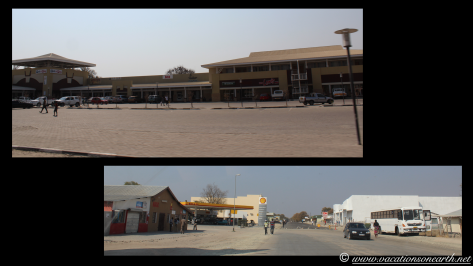 The main road in Katima Mulilo was undergoing some roadworks.  We made our way, weaving through and down the side roads,  to see if the pharmacy was open, which it wasn’t.  The Shoprite was open so we stocked up on a few groceries before heading off to find our campsite for the night. 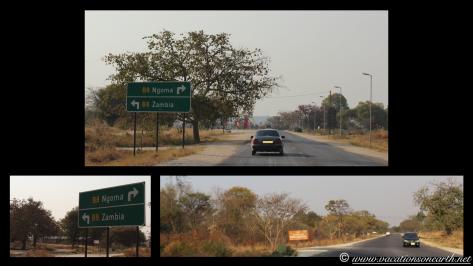 We turned right and took the B8 Ngoma road that runs from Katima Mulilo, Namibia to Botswana.  We stopped at a few places along our way to view their facilities.  These below were quite a bit closer to town than where we ended up staying. 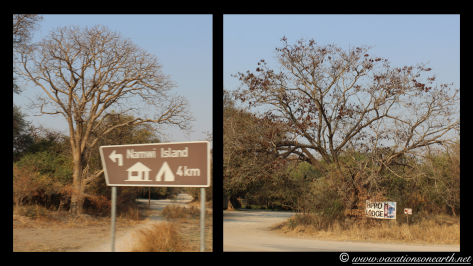 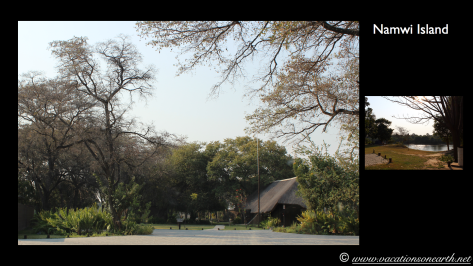 The road to Island View Lodge and Campsite, after turning off the B8 –

This farm was once producing quite a few pounds of fish around 2012.  Then it was “given back to the relevant councils” by The Minister of Fisheries and Marine Resources in April 2013 due to the fish food being too expensive. They weren’t producing any “Mahanga” which is an ingredient in the production of fish food and that they were unable to sell their fish at the local markets as the locals were unable to pay the price for the fish. (Drought affects fish farming – relief web)

Sarnissa (Sustainable Aquaculture Research Networks for Sub-Saharan Africa), Facebook post on May 15, 2012, in their reply to “thriving in the area fish farm.” They question this farm with its fish food problems, controversial marketing plan at conception and its situation along the Zambezi River where the area is historically known to have flooding problems, at times they haven’t been able to make it to the office on the farm due to flooding.

Situated in the Kabbe Constituency, alongside the Zambezi River, covering an area of 222 hectares of which, around 30 hectares are in production.

It was implemented by The Ministry of Agriculture, Water and Forestry and the University of Namibia (UNAM) in 2007.  It was declared a National Project in 2009 to boost the food security of the area and to assist with poverty reduction in the country.

It is a successful Green Scheme Project for the Caprivi where they are hoping to boost tourism in the area, employing the locals and distributing their supplies of fish or agriculture further out than just in the Caprivi Region.

It grows around three varieties of rice – Sugar, Iriga and Angola.

Millions have used over the years for the building of houses for the workers, warehouses and offices.  (Namibian Sun, 20/10/2013). The talk of the town was that this project has been successful so far.

We arrived at Island View Lodge around 5 pm.  They had a few choices for us in the line of campsites.  We could be right on the waters edge on a gravel campsite or we could be on a grass one alongside the trees and shrubs.  We chose the latter as we still had a beautiful view of the river in all its Zambezi glory.

Our campsite below at Island View Lodge where we watched a stunning sunset over the river, had a hearty meal that we prepared over our fire.  We enjoyed the much-needed facilities, the ablutions before retiring to bed. The showers are all gas run ensuring hot water 24/7.  It was a little bit strange, to be back inside a campsite with a few fellow campers partying well into the night.

For information and contact details for Island View Lodge and Campsite, please visit our next page, Thank you.